Update on the hives

We've had a couple of really heavy rain storms the last few days - something of a blessing in semi-arid Colorado! The moisture will give a nice midseason boost to the flowers and that will surely help the bees.

I inspected our Strasburg hives this morning and they are coming along nicely. All three have small but strong populations and queens that are laying eggs. Plenty of brood in all stages from just hatched to capped and ready populate the frames. I am concerned that the only hive with decent honey stores is the feral's, but most of that came from the Sicilians that proceded them.

The newly queened Italian hive seems to be getting along nicely. I finally got around to some long overdue housecleaning in their hive. Here's an important lesson to any beekeeper: make sure you have the bee space right! Last year, rather than keeping on top of spacing, we just let them go to town on one of their deeps. Bad idea and I found out why at the end the season. They had built two sections of comb off of one frame. When I pulled that frame up for an inspection, a good bit of comb was left behind. Unfortunately, the comb was loaded with brood, so we couldn't rightfully fix the problem then. I just set the frame back in and we basically had a ten-frame configuration going with nine frames. This year, they had switched that bit of comb (just a bit larger than a normal frame, actually) to honey storage. So I pulled up that comb and put in the upper deep so they wouldn't lose the little that they had. I heard of a trick that you can do with Langstroth frames and loose comb: rubber band it into a frame till the bees secure it more properly. Two things prevented me from doing this. First, no rubber bands. Second, it's kinda old, sad-looking comb. Since this was basically filler comb for badly spaced frames, I figure there's little loss.

The last thing I want to discuss with the Strasburg hives is attitude. Now that the Sicilians are gone (long live the Sicilians!), there's a bit of a difference in the atmosphere around their old hive. The feral hive that we replaced the swarmed-off Sicilians with are really easy to handle. I'd just about call them sedate they're so easy going.

As for the top bar hive in John's yard populated by the other bit of ferals we captured, they seem to be rocking it. And here's another lesson on bee space...maybe it's a theme for this post. In constructing the TBH I missed one incredibly important thing: a bit of wood to start the proper spacing in the front of the hive. Marty Hardison calls this a cleat and it would have helped an accidental harvest. About a week ago John and I did a quick inspection and I discovered my mistake even more quickly. The bees had built the comb for each frame to the front of each frame rather than off the lead. Live and learn, they say.

Unfortunately, this caused them to attach some of the combs to the frame forward of the main frame, thus weakening the connection to the frame. The only way to really correct this problem is cutting off the comb and making them start over. Well, with one of the frames, that's exactly what they'll have to do. As I was lifting the frame, the top half filled with honey and the bottom with brood, it collapsed on me. John's comment: "This is possibly the worst inspection I have ever seen you do, Bob."

This is actually the third time that a frame has fallen apart on me. Last year's collapse was a honey comb. The first one from this year was also a honey comb with some brood that I was able to secure in the upper deep of the Italians with the original queen. Last year's and this latest one turned into accidental harvests. With this year's, I placed the comb that had brood on it toward the back of the hive to encourage the workers to go that way and to make sure they didn't lose any of the work force. I must mention, despite my messy manhandling of their home, they also appear quite easy to handle, though more energetic than their Strasburg sisters.

I must say that the honey from the TBH is mighty tasty! It's a semi-opaque orange-amber color with a touch of cloudiness from the pollen that also was stored in the comb. The honey is sweet, but not overpoweringly so, and has a lovely citrus touch to it. There's good flavor in this part of the season's flowers!

When we did the first inspection, we knew that the hive would be exploding with bees soon as the queen is a prolific layer and much of the brood present was capped. I took a peak at them yesterday and, yep, their population has exploded. The comb that I placed in the back is all hatched and cleared of brood. Now the girls are using it to store honey. Waste not...
Posted by Bob Nelson and John Rodgers at 3:58 PM 1 comment: 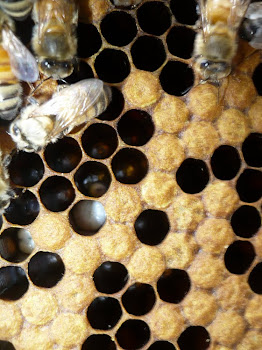